Skip to main content
Uppsala University Department of History ... The Coming of Age of ...
Listen

The Coming of Age of the Public Fetus 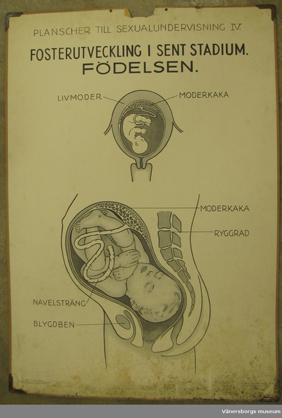 If you would like to attend without a paper or a presentation, the deadline for application is January 31, 2019. Please indicate your reasons for wanting to take part in the workshop, and please note that only attendees who present a paper are eligible for economic support.

In the late 1980s and early 1990s, feminist scholars started to use the concept of “the public fetus” to describe the growing dissemination of fetal images in the public. This process was often connected to the publication of Swedish photographer Lennart Nilsson’s pictures of human fetuses in the mid-1960s and the increasing use of the obstetric ultrasound. Many have analyzed the consequences of this change and how images of fetal bodies have been used in anti-abortion campaigns, especially in the US context. However, while these issues are still highly relevant, the historiography of “the public fetus” has also been problematized, which calls for further research. For example, how were pregnancy and fetuses made publically visible in earlier periods and in other cultural contexts? And how can new historical perspectives extend our knowledge of this development and of today’s visual culture? Given the media expansion of the last decades and contemporary political struggles over reproductive rights, we find it important and timely to advance scholarly discussion on these matters.

The purpose of this workshop is to bring together scholars from a range of disciplines to further explore pregnant and fetal bodies in visual culture. Our aim is to expand the geographical and historical scope of inquiry and to discuss visualizations of pregnancy across a variety of media and contexts. We are interested in current research on this topic in history of medicine, gender studies, film and media studies, art history, and other relevant fields, and invite scholars working on a wide range of materials to join us in an interdisciplinary endeavor. 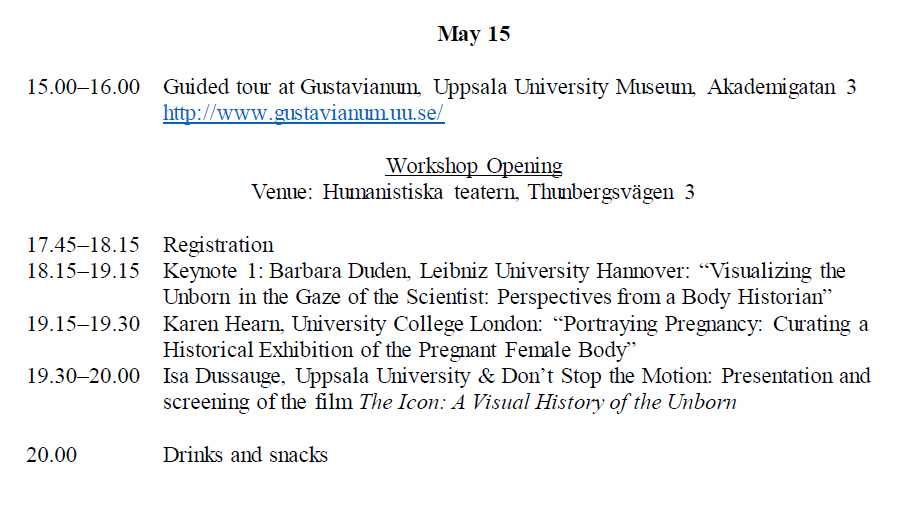 Downloadable Poster for the Public Lectures, May 15 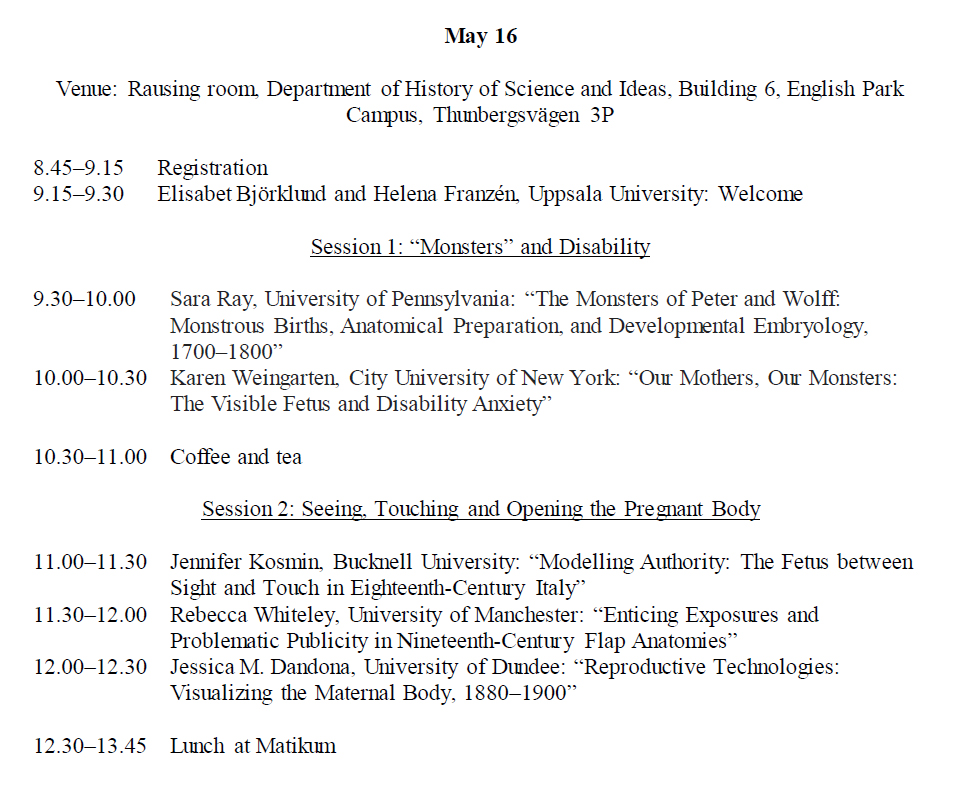 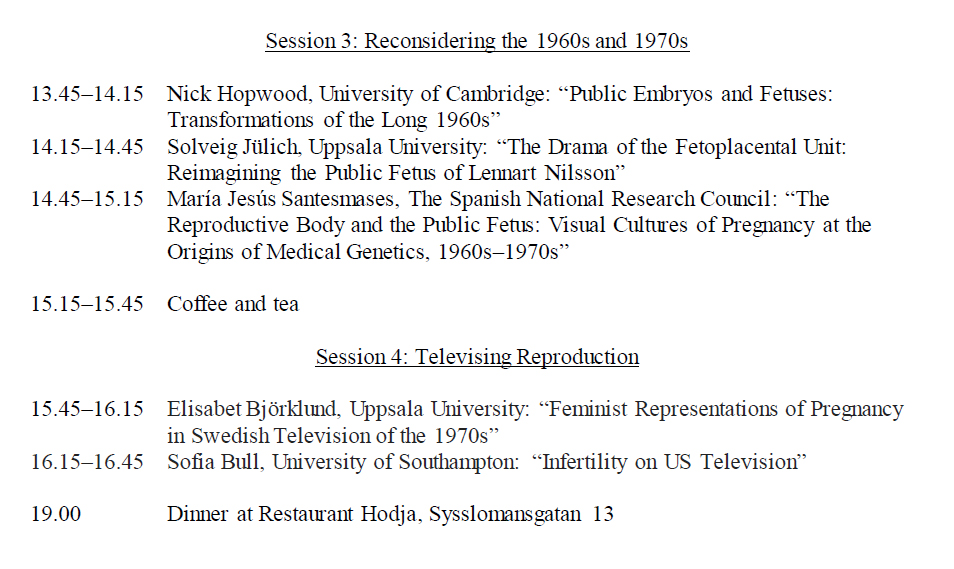 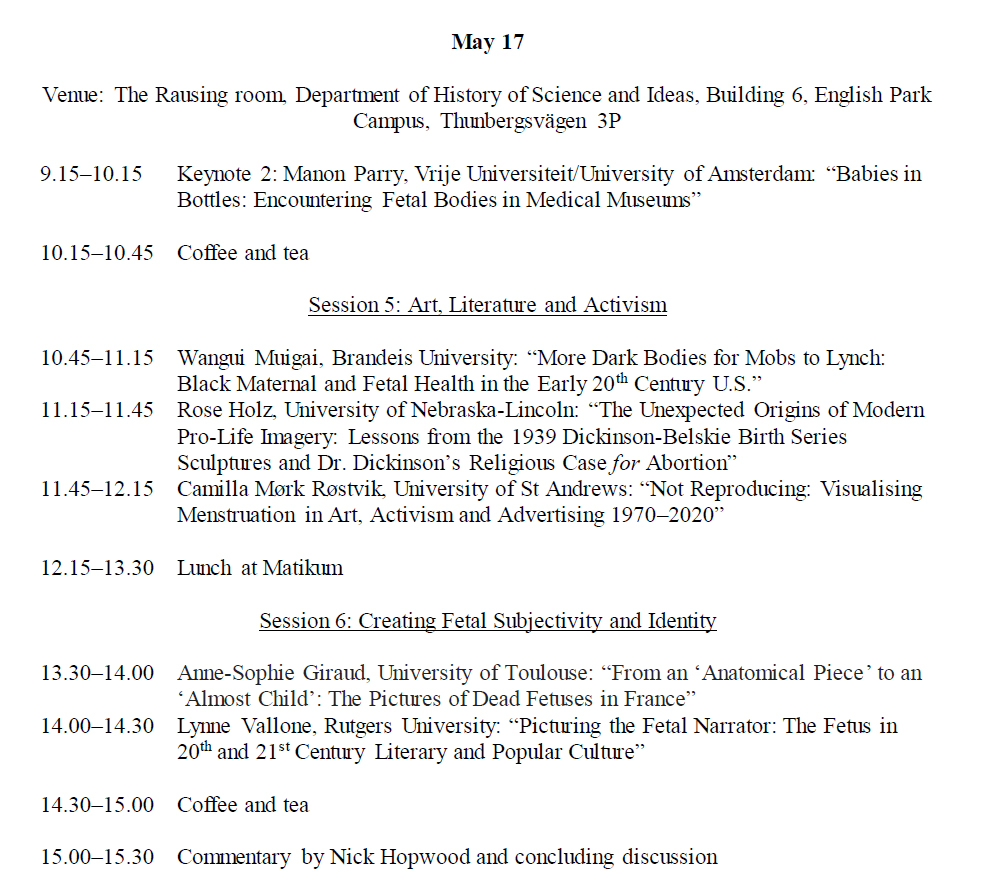 Registration, lunches, workshop dinner and accommodation (two nights at the conference hotel) are free of charge for participants presenting papers. It may also be possible to obtain limited economic support for travel expenses. Please indicate in your application if such support is required for attendance and what level of support is needed.

The workshop is organized by by the research program ”Medicine at the Borders of Life" through Elisabet Björklund and Helena Franzén.

The research program ”Medicine at the Borders of Life: Fetal Research and the Emergence of Ethical Controversy” is funded by the Swedish Research Council and hosted by the Department of History of Science and Ideas at Uppsala University, Sweden.

We especially, but not exclusively, welcome papers and work-in-progress presentations on the following topics:

Abstracts for 20 minute papers or work-in-progress presentations, of a maximum of 300 words, should be submitted no later than January 31, 2019, to Helena Franzén. Please provide your full name, institutional affiliation, and contact details. The format of the workshop will not allow for more than ca.12 papers. We will evaluate the abstracts based on the originality of the research and the relevance to the theme of the workshop. Applicants will be notified if their papers have been accepted by February 11, 2019.

The workshop language is English. A publication is planned, based on selected papers from the workshop.

Calendar
Seminars and other events at the department
Welcome
To department first page
Last modified: 2023-01-11
Print