The Voter in Social Science, Politics and Propaganda in the Interwar Years

The purpose of this project is to explore the remaking of key political concepts in the wake of the introduction of universal suffrage in Sweden 1919–1921. To this end, the uses and transformations of the concept of ‘voter’ will be the empirical focal point. Although little changed in the legal framework of universal suffrage after 1921, this crucial concept continued to be redefined in a number of political and social scientific contexts. For instance, the concept of the voter was a key issue in debates on political advertising, voting procedures and political theory as well as in analyses of political behavior and election statistics. This investigation will shed new light on how a democratic political culture was made during the interwar years. In essence, this project will study answers to the fundamental democratic question of how ‘the people’ are to be represented politically in a legitimate way. Since there was a great deal of transnational discussions of this question, this investigation will also contribute to our understanding of the making of modern Sweden in an international context. Empirically, the project will focus on election campaigns, political debates, popular education and social scientific inquiries. 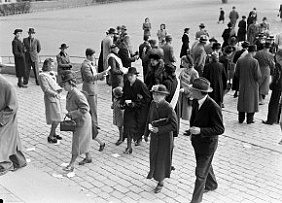