The project will throw new light on the connections between Sweden and Germany during the Nazi period through an analysis of the formation of scientific and journalistic ideals in networks of “pro-German” (i.e. with a positive view of the NS regime rather than admirers of German culture and science etc.) intellectuals. The project’s focus on pro-German networks allows for the study of the relationship between intellectual ideals and political values. The network approach will make it possible to analyse linkages between several academic and intellectual fields.

Modern science and journalism share an ideal of objectivity. Although frequently challenged on both theoretical and practical grounds, the ideal implies that new knowledge is produced and transmitted without influence from economic, political or other interests. The research project intends to highlight how notions of objectivity (or neutrality, “Sachlichkeit” etc.) and in particular its relationship to politics and ideology was interpreted and implemented during a formative period in modern journalism and science, namely the interwar period and World War II. The link between scientific and journalistic objectivity on the one hand and democratic values on the other was not self-evident. Supporters of the radical right could simultaneously lay claim to an objectivity ideal and profess anti-democratic values. This combination was typical of an interwar “reactionary modernist” approach on the right (and had some support also on the technocratic left-wing political spectrum). The project focuses on Swedish intellectuals with right-wing sympathies, which included a positive attitude towards the Third Reich.

The project consists of three parts that highlights science (Widmalm), medicine (Björkman and Ljungström) and journalism (Lundell). Views of knowledge and politics among pro-German groups in these areas will be examined from both printed and unpublished material; the groups’ media image will be examined together with the ideals being promulgated “backstage”.

One hypothesis is that intellectual ideals and attitudes towards NS Germany were co-produced within networks of politically like-minded scientists and journalists. Since such ideals, and the networks that underpin them, have a considerable inertia, it is reasonable to assume that they affected Swedish science and journalism, also in the years after the war. This is something that until now (with the exception of Johan Östling’s work) has been little discussed but which is important for understanding the emergence of the so-called knowledge society.

Sven Widmalm investigates the reception of German “cultural propaganda” among Swedish scientists and the growing interest in NS research policy among Swedish academics. The latter culminated when a delegation of 12 engineers (mostly professors) and industrialists (including a leading right-wing politician) visited Germany in 1941 in order to study and learn from NS research policy measures (such as the Reichsforschungsrat, created in 1937). Scientific ideals emerging in these processes will be studied as well as individual cases. One such study – of the chemist Hans von Euler-Chelpin – will be a contribution to the research programme “Science and Modernization in Sweden” (see separate description).

Patrik Lundell investigates the interest among Swedish journalists and publishers in German journalism from the point of view of propaganda and Zeitungswissenschaft. They developed a “rhetoric of objectivity” according to which purportedly neutral information regarding Germany fulfilled journalistic ideals of non-political and factual reporting. But interest also grew regarding science-based propaganda and advertising and a “new journalism” emphasising rhetorical skills. German journalism was contrasted against an Anglo-Saxon culturally oriented and “unscientific” journalism, considered to have dominated in Sweden. One case study focuses the journal Svergie-Tyskland published by the National Association Sweden-Germany (Riksföreningen Sverige-Tyskland).

Maria Björkman investigates the activities of a group of scientists and physicians at the Karolinska Institute, namely Folke Henschen and Torsten Sjögren. She focuses especially on their post-WWII views on race, and physical and mental abilities, in relation to their scientific and political ideals. The geneticist Sjögren belonged to the “right wing” of Swedish eugenics, and Henschen, who was a pathologist, was strongly engaged in the “race question” as late as the 1970s, opposing some of UNESCO’s statements on race. The study will also include physical anthropologist Bertil Lundman (Uppsala University) and histologist Gösta Häggqvist (the Karolinska Institute).

(Picture: Posters in Uppsala 1935, published by the Uppsala University Library) 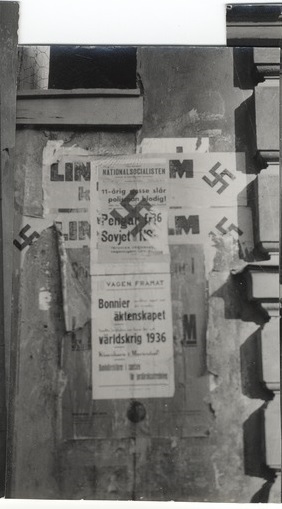