Ken Alder: "The Forensic Self: Proving Identity from the Counter-Reformation to the Dreyfus Affair"

This talk takes up the history of the forensic sciences to examine the changing relationship between individual identification and personal identity from the Counter-Reformation to the Dreyfus Affair. Specifically, it focuses on the methods of the French handwriting masters (maîtres écrivains), the first Europeans to claim the glorious title of "expert." These experts claimed to have mastered a new science of the particular, one which allowed them to identify legal subjects by proving the (dis)similarity of their handwriting and personal signature, which these experts touted as the new sign of a stable and credit-worthy character. But as several controversial cases show, this art also proved vulnerable to epistemic challenge, notably in the Dreyfus Affair. This broader project tracks changing standards of proof at the intersection of science, law, and historical scholarship in order to cast light on the development of this "forensic self." In the process this talk provides a bitter-sweet reflection on the rise and demise of script culture.

Ken Alder is professor of history and the Milton H. Wilson Professor in the Humanities at Northwestern University, where he directs the Science in Human Culture Program. He is the author of a novel, The White Bus (St. Martin's, 1987) and three works of history: Engineering the Revolution: Arms and Enlightenment in France, 1763-1815 (Princeton, 1997; Chicago, 2010), winner of the 1998 Edelstein Prize (SHOT); The Measure of All Things: The Seven-Year Odyssey and Hidden Error that Transformed the World (The Free Press, 2002), translated into 12 languages and winner of the Davis Prize (HSS), the Dingle Prize (BSHS), and the Kagan Prize (Historical Society); and The Lie Detectors: The History of an American Obsession (The Free Press, 2007). Alder is currently working on two projects. The first traces the history of the forensic sciences from Renaissance handwriting analysis to DNA-typing. The second is a global history of technology told from the perspective of the material objects themselves. For these and other projects he has received fellowship support from the National Science Foundation, the Guggenheim Foundation, and the National Endowment for the Humanities. He is a Fellow of the American Academy of Arts & Sciences. 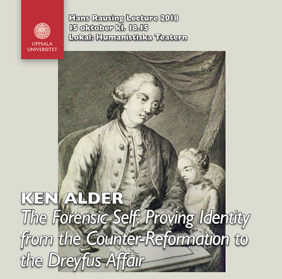