The epistemological value of generality has long been thought as constitutive of scientific practice. However, does this mean that generality has been understood uniformly? To this question this lecture replies in the negative. The argument relies on two main examples, and also comparison between them and other cases. One of the examples is taken from the mathematical corpus that has come down to us from ancient China. It gives us the opportunity to examine different practices of generality with respect to numbers and operations. This example raises the theoretical problem of analyzing how actors understood and practiced generality, when generality can mainly (but not only) be grasped through its effects on the mathematical knowledge presented in a certain number of writings, and practices that can be restored relying on these writings. The second example will take us to 19th century Europe, inviting us to examine how actors understood and practiced generality in geometry. These examples will illustrate how one can gain a finer-grained understanding of the meanings and values actors attached to generality in scientific practice, if we focus on epistemological cultures, in a sense that will be discussed. The local approach to generality that this lecture advocates will also allow us to highlight actors’ philosophical work on generality. Bringing this work to light enables us to grasp how a philosophical work carried out in a specific mathematical context was read as such and adopted in another mathematical context, where it enabled practitioners to achieve major new scientific developments. In other words, the lecture illustrates how practices and understanding of generality circulate across epistemological cultures. Finally, in the two main examples examined, generality will appear as an element in a set of epistemological values. We will conclude with a consideration of how actors appear to have understood the relationships between various epistemological values and also the structure of these sets of values.

Karine Chemla, Senior Researcher at the French National Center for Scientific Research (CNRS), in the laboratory SPHERE (CNRS & University Paris Diderot), focuses, from a historical anthropology viewpoint, on the relationship between mathematics and the various cultures in the context of which it is practiced. Chemla co-edited recently The Oxford Handbook of Generality in Mathematics and the Sciences (with R. Chorlay and D. Rabouin, Oxford University Press, 2016), and Cultures without culturalism: The making of scientific knowledge (with Evelyn Fox Keller, Duke University Press, 2017). 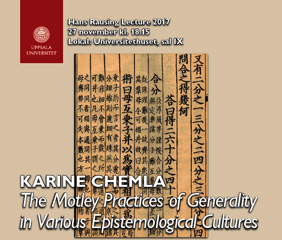