In the two decades following the 1962 publication of Silent Spring, the US government sought to regulate environmental pollutants in the name of controlling human cancer. The development of short-term tests for mutagens promised an inexpensive, rapid way to identify carcinogens among the tens of thousands of chemicals on the market. However, by the 1980s, findings from these rapid, in vitro mutagenicity tests corroded these hopes. On the one hand, it turned out that some chemical carcinogens were not also mutagens, and thus escaped detection in these tests. On the other hand, many natural substances, such as compounds in foods and beverages—as well as products of normal metabolism—proved to be mutagenic. Related advances in understanding DNA damage led biologists increasingly to regard cancer as a byproduct of aging. A public anxious about the dangers of contaminating pesticides and food additives was confronted with the message that the natural components of the human diet were already carcinogenic. In turn, antiregulatory interests (especially chemical companies and conservative politicians) seized on the emerging complexities of controlling human exposures to mutagens to subvert environmental regulation. This lecture attempts to offer a critical appraisal of the diet-cancer conundrum of the 1980s against the background of the emerging field of genetic toxicology.

Angela N. H. Creager is the Thomas M. Siebel Professor in the History of Science at Princeton University and the author of The Life of a Virus: Tobacco Mosaic Virus as an Experimental Model, 1930–1965 and Life Atomic: A History of Radioisotopes in Science and Medicine, both published by the University of Chicago Press. Her recent research focuses on the history of environmental health and regulation. She is currently President of the History of Science Society. 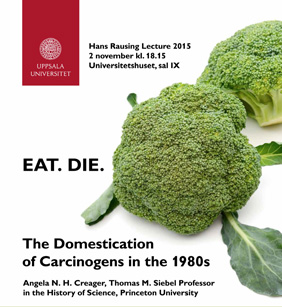