As they are usually understood, the designations "nuclear wasteland" and "pure wilderness" are opposites; when they converge into nature reserves on the sites of contaminated lands we often describe this circumstance as "paradoxical" or "ironic."  Taking stock of plans to handle lands that will remain saturated with radionuclides for tens of thousands of years, I argue that the categories of wastelands and wilderness are far from dichotomous; that that their relation is more intriguing (and disturbing) than a binary of purity and corruption.  As we create scenarios for the far distant future of these lands, we have been forced to reconsider the nature of memory, cultural continuity, fiction and non-fiction, and even the relation of the human to nature.

Peter Galison is Joseph Pellegrino University Professor of the History of Science and of Physics at Harvard University. His work explores the complex interaction between the three principal sub-cultures of physics–experimentation, instrumentation, and theory, and their embedding in politics and materiality. Among his books are: How Experiments End (1987), Image and Logic: A Material Culture of Microphysics (1997), Einstein’s Clocks, Poincaré’s Maps (2003), and, with Lorraine Daston, Objectivity (2007). Since 2002 he is also making documentary films–on the h-bomb, secrecy and the long-term storage of nuclear waste–that explore the relation of scientific work with larger issues of politics. 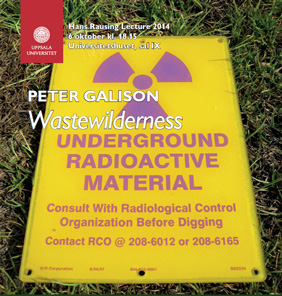