Charles Darwin built a world around an implied metaphysics of time that treated deep time as something qualitatively different from ordinary, experienced time. He did not simply require a vast amount of time within which his primary evolutionary mechanism of natural selection could operate; in practice, he required a deep time that functioned according to different rules from those of ordinary, “shallow” time. The experience of the naturalist occupied shallow time, but it was from that experience that Darwin necessarily had to build his arguments concerning a transformism that took place on an entirely different temporal scale. Much of his reconstruction of what took place in deep time relied on inferences drawn from taxonomic classification, and those inferences in turn depended to a large degree on conclusions reached through the already-established practices of his fellow non-transformist naturalists.  By bootstrapping his transformist arguments, focused on both natural and sexual selection, with non-transformist classificatory judgments, Darwin attempted to convince his fellow naturalists of the truth of evolution in deep time. In other words, while Darwin argued for the existence of selective processes themselves in contemporary shallow time, their transformist consequences could only be traced out in deep time, being evidenced by both contemporary and paleontological slices, or laminates, of shallow time.

Peter Dear is professor of history and of science and technology studies at Cornell University. He is the author of, among other books, Discipline and Experience: The Mathematical Way in the Scientific Revolution (1995), which was awarded the Ludwik Fleck prize from the Society for Social Studies of Science in 1998, and The Intelligibility of Nature:  How Science Makes Sense of the World (2006), which discusses episodes stretching from the seventeenth to the twentieth centuries. A specialist in early-modern Europe, his interests also extend to aspects of science as a cultural product in various periods, including most recently work on Charles Darwin and ideas of the uniformity of nature. 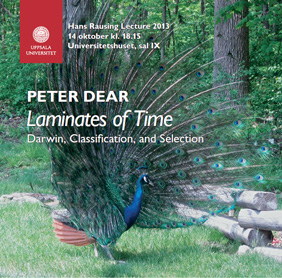