Kapil Raj: "Bringing the World into the History of Science"

The history of the sciences on a global scale is often told in terms of the con- tribution of individual civilisations, in particular Mesopotamia, Greece, ancient Egypt, China, India and the Islamic world as precursors to modern science, which is commonly acknowledged as being European. Encounters between the knowledge systems of these regions, and others, such as Africa or Polynesia, is often recounted in terms of occasional debates between travellers and indigenous grandees who expressed their curiosity about each other. Based on examples from four centuries of encounter and interaction between European and Indian knowledge practices, this talk will demonstrate how the circulation of skilled practitioners from both cultures, far from being a mere conversation between the protagonists, has been the site for the production of significant parts of modern science. It will argue for a generalisation of this model of circulation and interaction.

Professor Kapil Raj is Directeur d’Études at the École des Hautes Études en Sciences Sociales in Paris, and co-chair of the Alexandre Koyré Centre. He is the author of Relocating Modern Science: Circulation and the Construction of Knowledge in South Asia and Europe, 1650–1900 (2007) and has co-edited The Brokered World: Go-Betweens and Global Intelligence (2009). 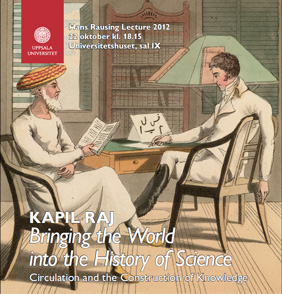