Steven Shapin: "Changing Tastes: How Things Tasted in the Early Modern Period and How They Taste Now"

In dietetic and natural philosophical frameworks of the period from Antiquity to the seventeenth century, the subjective experiences of taste, and indeed the experiences of digestion, testified to the make-up of the world’s edible portions. That is, such subjective experiences might be both philosophically and practically reliable. How did that framework help early modern eaters make sense of their bodies and that portion of the world that constituted their aliment? How did that sense-making capacity change over time, as new medical and scientific frameworks emerged from the eighteenth century and, finally, became scientifically dominant in the nineteenth and twentieth centuries? What happened to the subjective experiences of taste when they no longer indexed how the world really is? How has the vocabulary used to describe taste changed? And how do we now know about the edible world?

Steven Shapin is Franklin L. Ford Professor of the History of Science at Harvard University. He is the author of Leviathan and the Air-Pump: Hobbes, Boyle, and the Experimental Life (1985, with Simon Schaffer); A Social History of Truth: Civility and Science in Seventeenth-Century England (1994); The Scientific Revolution (1996); The Scientific Life: A Moral History of a Late Modern Vocation (2008); and Never Pure (2010). He is a Fellow of the American Academy of Arts and Sciences and has been awarded prestigious prizes such as Robert K. Merton Prize, Herbert Dingle Prize, J.D. Bernal Prize as well as the Erasmus Prize (with Simon Schaffer) for exceptionally important contributions to European culture, society and social science. 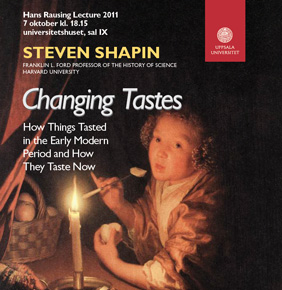