Observation is the most pervasive and fundamental practice of all the modern sciences, both natural and human. It is also among the most refined and variegated. Observation educates the senses, calibrates judgment, picks out objects of scientific inquiry, and forges communities. Its instruments include not only the naked senses, but also tools such as the telescope and microscope, the questionnaire, the photographic plate, the glassed-in beehive, the Geiger counter, and a myriad of other ingenious inventions designed to make the invisible visible, the evanescent permanent, the abstract concrete. Where is society? How blue is the sky? Which way do X-rays scatter? Over the course of centuries, scientific observers have devised ways to answer these and many other riddles—and thereby redefined what is under investigation by the way in which it is investigated. Observation discovers the world anew.

Scientific observation is however a form of scientific experience as carefully crafted as the experiment – and it emerged, in tandem with the experiment, in the course of the seventeenth century. Previously, both terms had figured only rarely in natural philosophy: Experimentum and its vernacular cognates had previously referred to a trial or test, often conducted in the workshops of artisans; observatio had been since Greco-Roman antiquity associated with natural divination: the signs that portended storms, fat or lean harvests, or future destinies (as in the case of astrology). In the past twenty years, historians of science have written a rich history of how experiment rose to epistemological prominence in the sciences, but the story of how observation created a veritable empire by the mid-eighteenth century has yet to be told – a key chapter in the history of modern experience.

Lorraine Daston is Director at the Max Planck Institute for the History of Science, Berlin and Visiting Professor in the Committee on Social Thought at the University of Chicago. Her books include Classical Probability and the Enlightenment (1988), (with Katharine Park), Wonders and the Order of Nature, 1150–1750 (1998), Things that Talk: Object Lessons from Art and Science (2004), and (with Peter Galison), Objectivity (2007). She has also published on the history of quantification, the moral authority of nature, and natural law in early modern Europe. She is a Fellow of the American Academy of Arts and Sciences, the Berlin-Brandenburg Academy of Sciences, and the Leopoldina; two of her books have been awarded the Pfizer Prize of the History of Science Society. 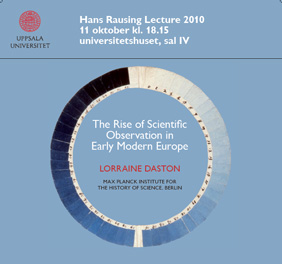