Jamie Cohen-Cole: "The Science of Children"

Higher Seminar in the History of Science and Ideas

This paper examines how psychologists treating children as though they are little scientists helps explains the fate of recapitulationism in the human sciences. Thinkers in the 19th and 20th centuries from Charles Darwin, Herbert Spencer, and Ernst Haeckel to G. Stanley Hall, John Dewey, and Jean Piaget advanced the idea that cognitive development in individuals repeats the long-term development of civilizations. However, after World War II Americans who treated children as scientists largely eschewed linear evolutionary models of mind. This paper explains how this transformation of psychology depended on two sources. The first was an extension of pre-existing efforts within the new field of cognitive psychology to understand adult humans as scientists. The second was what might now seem an inversion of intellectual hierarchies: scientists learned from humanists about children and about how thinking works. Psychologists found in case studies written by post-positivist historians and philosophers models of conceptual change that seemed to explain what happens to children as they age. These lessons also meant that psychologists would abandon the view that both the history of science and childhood involves a single pattern of liner progress. Indeed, rather than asserting that the ontogenesis of individual cognitive development parallels the phylogenesis of science, developmental psychologists came to argue that children are better at science than adults. Following historians also led psychologists to assert that not only their own discipline, but their very object of study, the child, was a social, historical construction.

The image is from the Jerome S. Bruner papers and part of a collection labeled "lecture slides." A reproduction of the photo (in black and white) appears in: Jerome S. Bruner, "Origins of Problem Solving Strategies in Skill Acquisition," in Logic and Art: Essays in Honor of Nelson Goodman., ed. Richard S. Rudner and Israel Scheffler (Indianapolis: Bobbs-Merrill, 1972), pp. 100–126. The caption in that chapter states that the image is printed "courtesy of Ted Ploumbaum, PIX, Inc, New York." 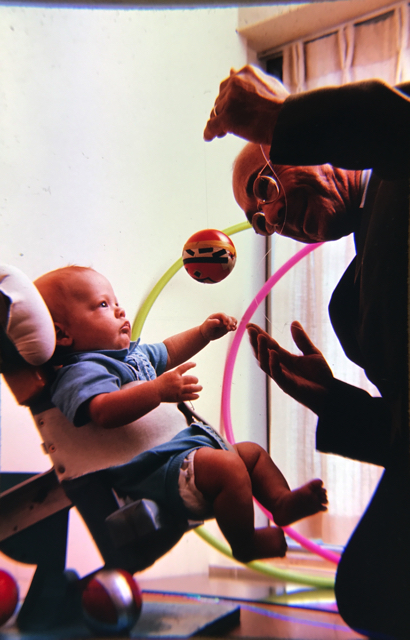